Thank you for expressing interest in this excerpt of Seamkeepers. I'm excited to share this with you, and I hope you enjoy this chapter. Thank you for following my journey!

Brynna Ellis was in school at the time of the first earthquake. It had started like any normal day—sitting in the back corner of math class, avoiding attention, and fiddling with the silver pendant around her neck. Her fingertips had begun to tingle, so she’d shifted around in her chair in hopes that it would pass.

By the time second period came, Brynna had anxiously isolated herself in a quiet corridor of the school. Both her arms had begun to lose all feeling, and she knew if her foster parents had to take her to the emergency room, she would be in a world of trouble.
By third period, Brynna was shaky and pallid. People had noticed the pain written in her expression, but no one said anything to her. She folded her arms across her desk and leaned over, no longer concerned about what the teacher might have to say.
All at once, it felt like a large part of her very soul was stripped from her, and it left a horribly hollow, burning feeling in her chest.
Brynna nearly bit her tongue off in her desperate attempt to refrain from screaming. Her nails dug into the soft, wooden surface of her desk, engraving marks alongside all the “so and so was here” scribbles in the tabletop. Unfortunately, if anyone had plans to ask Brynna if she was alright, they were overshadowed by the way the ceiling tiles suddenly shook, raining years of dust onto the high schoolers’ heads.
Several people screamed as the lights flickered out and the classroom rattled, drowning out the teacher’s pleas for everyone to stay calm. For a moment, the room went dark, and then the buzz of the backup generator hummed through the school. Red lights swept through the halls as the emergency system sang, beckoning the students to evacuate in an orderly fashion.
Brynna gasped for air, sputtering as she struggled to stand. Her classmates were filing out the door, but she could hardly gather her bearings.
“You can’t make me wait for you!” Brynna’s teacher, Ms. Eversteen gripped at her jacket. Through her blurry vision, Brynna could tell that the middle-aged woman was on the verge of a panic attack.
“I’m sorry,” Brynna coughed, shuddering with pain. Whatever was happening to her had picked a fine time to show up, what with the way the school continued to judder. The chalkboard fell off the wall, causing Ms. Eversteen to nearly jump out of her skin.
With great strain, Brynna managed to get out of her seat and limp through the school. Metal lockers were toppled over in the hallways. Ceiling tiles and scattered belongings riddled the filthy floors.

No one followed me, was the first thing Brynna thought after breaking away from the discord in the city. For some reason, this frightful event had seemed like a miracle to her. Despite the disorder, Brynna found her first bit of peace in knowing she controlled her own life, now.
In the chilly atmosphere on the hilltop, there wasn’t a soul to find her. The wind sifted through the grass she was standing in, softly beckoning nature to resume its silent reign. Under the blue light of the broad moon, Brynna took a seat and watched with wide eyes as fires slowly lit up the once-electric town below. They weren’t the friendly, cozy kinds; they were the kinds that spread and destroyed. The reality of what had overcome Renson slowly began to distort her personal victory.
While she was grateful to have finally seized control of her life, her current predicament began to trouble her. As the chilling wind drank away the rosy feeling, Brynna realized she had no idea where to find refuge. If she wanted to sleep peacefully through the mayhem, she knew she had two options: steal or sneak back into her former residence to pack a backpack.
Does it count as stealing if society is in shambles?
Her conscience said “yes,” but her shivers said “no.”
I’ll wait it out. She grimaced, trying to come to an agreement with herself. Folding her arms and propping them on her knees, Brynna stared across the landscape and listened to the madness of the world below.
With a slowly dripping nose, Brynna sniffled, curled up, and buried herself in the dead grass. If she had to venture back into the city, she could tolerate waiting for the dreadful screaming to go away.

As the horizon burned pink with the first rays of the sun, Brynna awoke with a cough. Her throat was sore and she felt numb with cold, but the promise of sunlight rejuvenated her.
All she could see were pillars of smoke billowing between almost every building. How the smell alone hadn’t woken her, she didn’t know. Wondering what she might find, she pulled her hair back and began trekking down the hill.
The untouched parts of the city were brimming with arguing citizens. As people started to fight over food and things they had looted, recently unemployed shopkeepers helplessly stood idle while others tried to defend their merchandise with whatever they had on hand.
Keeping a low profile, Brynna hurried onward and dared to turn onto a street filled with smoke. Shop doors had been broken open, and their merchandise flooded into the road like décor. Piles of furniture cluttered the sidewalks. Shredded advertisements were sprinkled like confetti. Signs had been torn down like fallen banners. Brynna knew the earthquakes were only partially to blame for the wreckage.
She cut through an alleyway to the next street, where her eyes settled on a tipped-over vending machine. To her relief, the door had already been pried open; however, this meant most of its contents were missing, aside from a few crumpled bottles. Parched, Brynna heaved against the machine and found a crinkled bottle of water stuffed far in the back. Her arm was just small enough to reach through the gap and retrieve the prize.
Suddenly, a group of shouting people came running around the bend. Startled, Brynna pressed herself against a dumpster to hide. The group blew past her, violently smashing store windows with makeshift weaponry.
Watching with both apprehension and curiosity, Brynna cowered to her knees and wondered what their intentions could be. They didn’t seem like the type to be robbing stores of their abandoned granola bars—they looked more like lawyers than looters.
I’ll be sure not to go crazy and start an armed gang of accountants, she smirked, attempting to keep calm. Her train of thought moved along quickly, pondering over why no one was trying to stop the crime. Had the power outages caused the authorities to give up on order? At the very least, shouldn’t the government have responded with reinforcements?
Unless, of course, the government was also out of luck, as well as everywhere else in the world. That was a disheartening idea.
Before long, the raiders left the street. Their shouts lingered in the distance as they took on another road, and Brynna peered around the corner. In case someone else came along, she hurried in the opposite direction as before and ducked into a building.
As she slipped through the cherry wood doors, she stopped to stare at the colorful mess. It had been ransacked, but there were still several racks of clothing neatly hung along the back walls. At some point (some point being two days ago), this had been a well-established business of fine apparel, far too expensive for a little girl to touch. The place smelled strongly of perfume, like someone had dipped each piece of fabric into an ocean of rose petals. As her eyes danced around the room, Brynna could imagine a stingy old woman leaning across the counter and telling her to leave—unless, of course, she had her parents’ credit card.
Since she was in the neighborhood, Brynna decided to look for a jacket. A shiver of guilt flew through her. She tried to combat it with the excuse that everyone was doing it, so it was fine. Besides, if practical clothing grew scarce, she didn’t want to be one of the people wearing a rhinestone-slathered vest and velveted high heels.
Brynna was just about to try on a gray jacket when a male voice startled her.
“Stealing is wrong, you know,” it echoed against the tile floor.
She whirled around and tripped, colliding with a metal clothing rack. Hangers clattered to the floor.
It was the stranger from the bonfire. What was his name… Derick?
As sweat beaded on her forehead, she frowned distastefully. “You can’t just sneak up on someone.”
“The dressing rooms still work,” he suggested, only to be met with a cold look. Sheepishly, he recounted why he’d followed her into the shop after noticing her running through the streets. “Sorry to catch you like this”—he stuffed his hands in his pockets—“I just wanted to apologize for last night.”
Although her complexion twisted in confusion, Brynna ignored him and put on the jacket. “Is it really stealing? I mean... it is, but—” His look hushed her.
“Trust me; I know what stealing is.” He stifled a yawn. “You’re not exactly… Robin Hood.”
Navigating around the shelf that separated them, he faced her and crossed his arms. “But, y’know. Desperate times, right? I don’t think the cash register would’ve worked anyway, and I’d rather see you wearing that than seeing it in someone’s fireplace.” 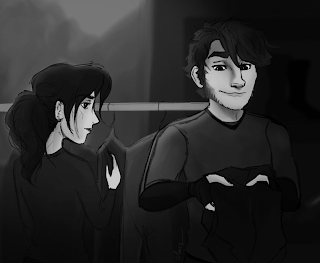 Adrienne R.
Hello! I'm Adrienne, and I'm thrilled to share my world with you. I've been writing since I knew what a book was, and I don't plan to stop any time soon. My favorite genres are sci-fi and fantasy (often spliced together) with plenty of drama, comedy, and all the heart-warming moments in between. If these are things you enjoy, my hope is that you'll feel right at home here. Thanks for checking me out!